ABOUT THE DOCTOR AND HIS METHOD

Mikhailik Vitaly – Doctor of Osteopatic Medicine , psychologist, specialist for Psychosomatics. He leads a private practice in France (Cannes and Nice).

Got the higher medical education in France. Has received the diploma and defended the title Doctors osteopathy in a French Institute of osteopathy ATMAN (Sophia-Antipolis) and a diploma of a psychologist and specialists in Psychosomatics of Paris University psychology and psychotherapy Sigmund Freud (SFU-Paris). Regularly participates in the international and local scientific and practical conferences and seminars in the field of an osteopathy and other directions of medicine. Upbuilding knowledges and practice used in his work help to define and to remove the effects quickly and effectively of consequences not only physical, but also psychoemotional, patrimonial and pre-natal injuries and spasms.

Violations are eliminated resulting in pain in the back, the joints, improves mental and physical activity, both in adults and in children, increases immunity and resistance to stress. Effects on internal organs, normalizes their function and improves the body’s metabolism. Many gynecologic problems and diseases of urinogenital system are very well treated by means of an osteopathy. Blood circulation and a lymph improves, puffiness limb and a varicosity can be removed and prevented. Institute where he studied Vitaly Anatolievich , known intensity study of craniosacral therapy – it’s incredibly effective area of osteopathy.

Institute where Vitaly Anatolievich studied, known depth study of cranio – sacral therapy – it’s incredibly effective range of osteopathy. This method very soft also makes impact on deep structures of a brain through correction of membranes and bones of a skull, brain covers and a compression of ventricles of a brain. Normalizing functioning of the central nervous system, the state of all organism gets better. The method is effectively applied at treatment of headaches of various etiology (a consequence of craniocereberal injuries, patrimonial injuries, stresses, migraine etc.). Symmetry of a skull is restored, occlusion improves, dysfunctions of temporal and mandibular joints are removed, spasms of suboccipital and cervical muscles and this list relax it is possible to continue.

The secret, uniqueness and efficiency of a method of Doctor Mikhaylik, are born from a able complex combination of knowledge of an osteopathy, psychology, anatomy and physiology of a human organism, biodynamics, post-urologists, somatic and respiratory technician, and also traditions of Chinese medicine and Ayurveda checked by millennium. The spiritual nature of man, of course, considered.

A human body considered as a system consisting not only from anatomic structures but also biopower, biophysical, biochemical and psycho-emotional processes. Such approach allows to reveal system and organic dysfunctions, define their reason, increases efficiency of treatment, provides good prophylaxis and minimizes painful relapses.
Vitaly Anatolievich helps to people coming to him on a reception, to improve physical health and harmonize the psycho – emotional state. 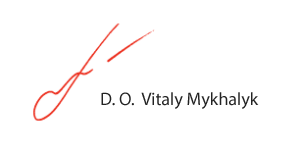 TREATMENT AND CARE ABOUT HEALTH

The osteopathy– shows fine results, even where the classical medicine doesn’t cope. She cures pain of different localization, many acute and chronic diseases, and similarly is wonderful practice for strengthening of health, immunity, strengthening of protective functions of organism, betrays flexibility and youth to the body, reduces fatigueability, does life more joyful.
Very often there is enough one session that for a long time or even there has forever passed the pain which has brought you into an osteostalemate office.

It is desirable to come to consultation with the available results of the previous inspections – the x-ray pictures yielded by ultrasonography, a computer and magnetic resonance tomography, biochemical blood tests, urine, etc. If you don’t have on hands sciagrams and other analyses – don’t despair! Sensitive hands of experts may even osteopathic diagnose abnormalities not visible on x-ray images , and in most cases , it is enough for the effectiveness of treatment. Considering that on a session it is necessary to take off outerwear, for survey, a palpation and necessary tests, dress underwear, convenient for you, for women it can be an open bathing suit. Need to examine all body, is explained by the fact that the reason of pain can be considerably removed from that place which disturbs you.
Osteopath selects the appropriate techniques, which , in his opinion , will give a most facilitation to the patient , depending on the results of survey and revealed violations.

Correction of serious violations carried out completely painless for the patient, with the correct choice of osteopathic techniques. The doctor operates within the physiological barrier fabrics. Its main purpose – to give your body the impulse to self- restoration.

A OPPORTUNITY TO AVOID OPERATION

The course of treatment from an osteopath can become a full-fledged alternative to surgical intervention in the case of injury, stagnation in the circulatory system and the musculoskeletal diseases – musculoskeletal system. There are effective methods of correction such as deformities of the spine, flat feet, phlebeurysm and others.

You should take less medications, what to reduce risk to run into the side effects of treatment. Osteopathic influence significantly reduces pill burden on the body with endocrine abnormalities, respiratory diseases and inflammatory processes in the pelvic organs.


DID YOU KNOW WHEN EFFECTIVE OSTEOPATHIC TREATMENT?

Osteopathy – the area of medicine known since the end of the nineteenth century.

It is higher school of manual therapy, that requires from an internist permanent, careful study and understanding of human nature. Osteopathy includes a variety of destinations such as: visceral and craniosacral therapy, chiropractic, vertebrology, biological decoding of illness, reflexology, muscle and fascial techniques, breathing and physical exercises.

The founder of osteopathy is the American doctor Andrew Taylor Still, the son of a priest and a doctor. He decided to follow his father and took up medicine from an early age. AT Still can’t to save his three children and his wife in 1864 during a meningitis epidemic, when he was a doctor. This shocking occasion was impetus for the search for alternatives to orthodox medicine. And he found it! The doctor helped heal those who asked for help from patients, using their new method in 1874, during an epidemic of dysentery.

Still founded the American School of Osteopathy (now A.T. Still University of the Health Sciences) in Kirksville, Missouri, for the teaching of osteopathy on 10 May 1892.
Osteopathy developed and enriched with new knowledge in almost century and a half.

GOOD KNOWLEDGE OF THE OSTEOPATHY WORLD

Psychosomatics (ancient Greek ψυχή -. Soul and σῶμα – body) – the direction in medicine (psychosomatic medicine) and Psychology, studies the influence of psychological factors on the occurrence and during the somatic (bodily) diseases.

Within the framework of psychosomatic medicine were investigated and researched the connection between personality characteristics (constitutional features, features harakterai personality, behavior styles, types of emotional conflicts), and one way or another medical condition.
Popular opinion in alternative medicine, that all human diseases are caused due to psychological disorders and discrepancies that arise in the soul, in the subconscious, in the human mind.

Information on the complementarity of osteopathy and psychosomatic medicine will be updated regularly. Welcome, please follow the blogs.

IN THESE HANDS – THE WISDOM OF THE MILLENNIUM!

TO REGISTER IN RECEPTION